Have you guys noticed that the deer population is going crazy? As my husband and I have, between us, been involved in 4 accidents involving deer, we're very aware of them. In three of those accidents, the dang deer either jumped into the path of the car at the last minute or jumped INTO the car after we'd gone past them and were nearly out of range. In the fourth instance, the deer stood broadside just over the crest of a hill; there was no way to avoid the collision.

So we've concluded that deer aren't especially smart and that the best way to minimize the risk of a deer-versus-car wreck is to be hyper-alert.

Want proof that the deer population is rising? I went for an (approximately) 5 mile ride on Saturday, and here's a photo of just a few of the deer I saw: 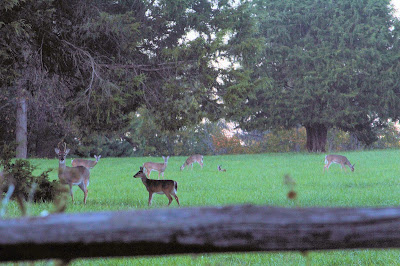