This week's photos are culinary and include a recipe for "crusty bread".... the easiest one you're likely to find.

In a large mixing bowl, mix together flour, salt, and yeast. Add water and mix until a shaggy, hard-to-stir dough forms. Cover the bowl with plastic wrap and set it aside in a warm, dry location for 12-18 hours. It will rise slowly... very slowly... but look what happens: 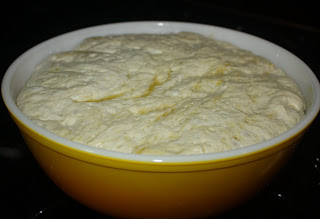 Preheat the oven to 450 degrees. Once the oven reaches temperature, place a cast-iron pot with a lid in the oven and heat the pot for 30 minutes. Meanwhile, pour the dough onto a heavily floured surface and shape it into a ball. Cover it with plastic wrap and let it set while the pot is heating. 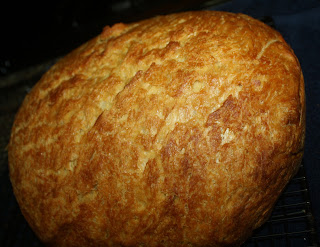 Remove the pot from the oven and drop in the dough. Shake the pot a bit to distribute the dough, but don't worry if it's a bit uneven - it will tend to even out during the cooking process. Replace the cover & return the pot to the oven for 30 minutes. After 30 minutes, remove the lid and bake for an additional 15 minutes. Remove bread from the oven and place on a cooling rack to cool.

Don't be afraid to experiment, either. I made a second loaf in a smaller Dutch oven, this time snipping in some fresh rosemary and a tad of minced garlic. 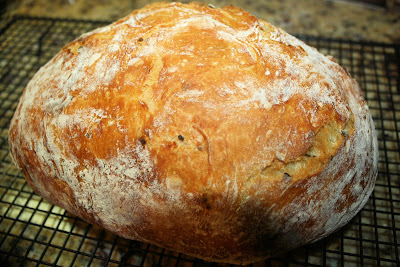 And I made another loaf with dried cranberries, clove, cinnamon, and a few sliced almonds tossed into the dough.

If you want to continue to experiment with "kneadless breads", do a web search - there are a host of recipes popping up out there. But as I said to start with, this particular recipe is by far the easiest I've found, and it'd darn good besides!

I told you this week's "wordless Wednesday" linky was unwordless, but I hope you enjoyed the photos & I hope you'll try the bread - the house smelled amazing, and the bread got rave reviews! Now let's see your photos!